Universal joints (UJs) do not transmit constant rotary motion when driving through any angle other than a straight line (zero angle).  When driving though an angle, a UJ imparts a cyclical faster and slower rotation to the driven shaft on each half revolution.  The amount of this speed variation is dependent on the angle;  the greater the angle, the greater the speed variation.

It can be calculated that at an angle of 25 degrees, a UJ rotating at 100rpm will cause the driven shaft to briefly reach a maximum speed of 110rpm in the first quarter revolution then drop briefly to 91rpm in the second quarter.  This higher and lower speed variation will be repeated in the next two quarter revolutions.

Speed variation causes vibration and noise, and wears out the bearings.  So what can be done? 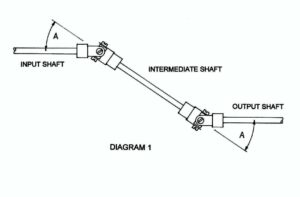 Provided the angles through which the two UJs are operating is the same, another arrangement is possible as shown in Diagram 2.  If a drive has to go around a corner of say 30 degrees, then two UJs can be used provided each joint turns the drive through half the angle; 15 degrees in this example (angle B in the diagram). The alignment of forks still has to be the same as described above.  The intermediate shaft can be short; in fact so short that the bosses butt against each other.  This double universal joint arrangement can be seen in the final drive of articulated earth-moving machinery with all-wheel-drive. 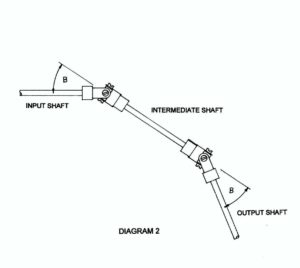 Rear-wheel- drive vehicles have UJs at either end of their tail shaft, taking the drive from the gearbox to the differential.  The gearbox shaft and the differential pinion shaft are kept parallel as much as the rear suspension will allow, and the forks of these UJs must be aligned as already explained.  The arrangement can often be viewed on large trucks where the driveline is exposed.

Speed variation is the reason why UJs are not used in the drive shafts of front-wheel-drive vehicles.  So-called Constant Velocity (CV) joints are used instead, to allow the front wheels to steer while the wheels are being driven.  However, CV joints are expensive to manufacture and are not available in the small sizes needed for Meccano models.