This model is based on the above Manual illustration and found in the 1930’s/40’s No. 7 Meccano outfit Manual, page 5. I have made changes. I used old unrestored parts including perforated strips in place of the flexible plates which, in the Manual model, had square corners.

A Meccano No.2 clockwork motor powers the lorry and fits neatly into the chassis.

The first drive entailed a horizontal ¾” diam. sprocket drive from the motor to a 3” diam. sprocket wheel which encountered many horizontal sprocket chain problems. So, I changed to a ½” pulley on the motor driving a 2” pulley, then a ¼” pinon meshing with a 1½” contrate wheel, then a ½” sprocket driving a 2” sprocket wheel on the rear axle. All this enabled the heavy truck to travel slowly over 90cms.The drive belt on the pulleys is a girl’s pony-tail tie, cheap, elastic and strong.

The truck’s tipper is raised by a length of Graham Jost’s cord he produced at the 2019 Meccano Exhibition. Thank you, Graham. The rope is wound, by hand, onto a 5/32” diam. drum near the cab through a small gear train, a ½” pinion driving a 1½” gear wheel and, the same again. A rachet wheel and spring-loaded pawl lock the tipper body in the up position and it is lowered by pulling back on the handle, a 1⅜” threaded pin, attached to the pawl. 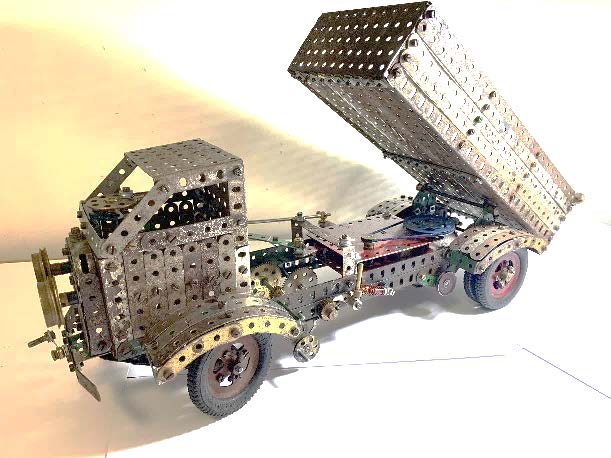 Made out of brass, the motor winding key is permanently attached to the motor.

The truck’s brakes are operated by a 4” curved strip attached to the stop/start motor lever and a small lever on the driver’s side of the cab. On the same side, another larger lever operates the forward/reverse motor mechanism. The truck travels 90cms on one winding! 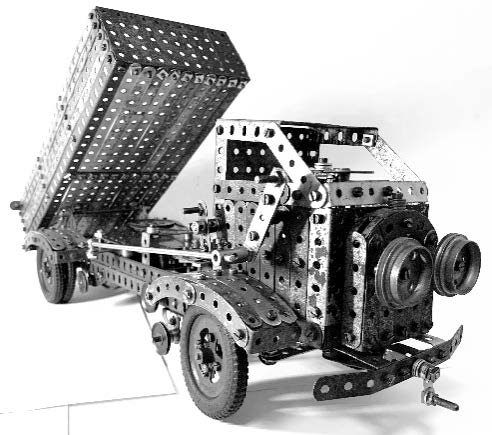